Debt.com » Research » How Important Is Valentine’s Day During a Pandemic?

How Important Is Valentine’s Day During a Pandemic? 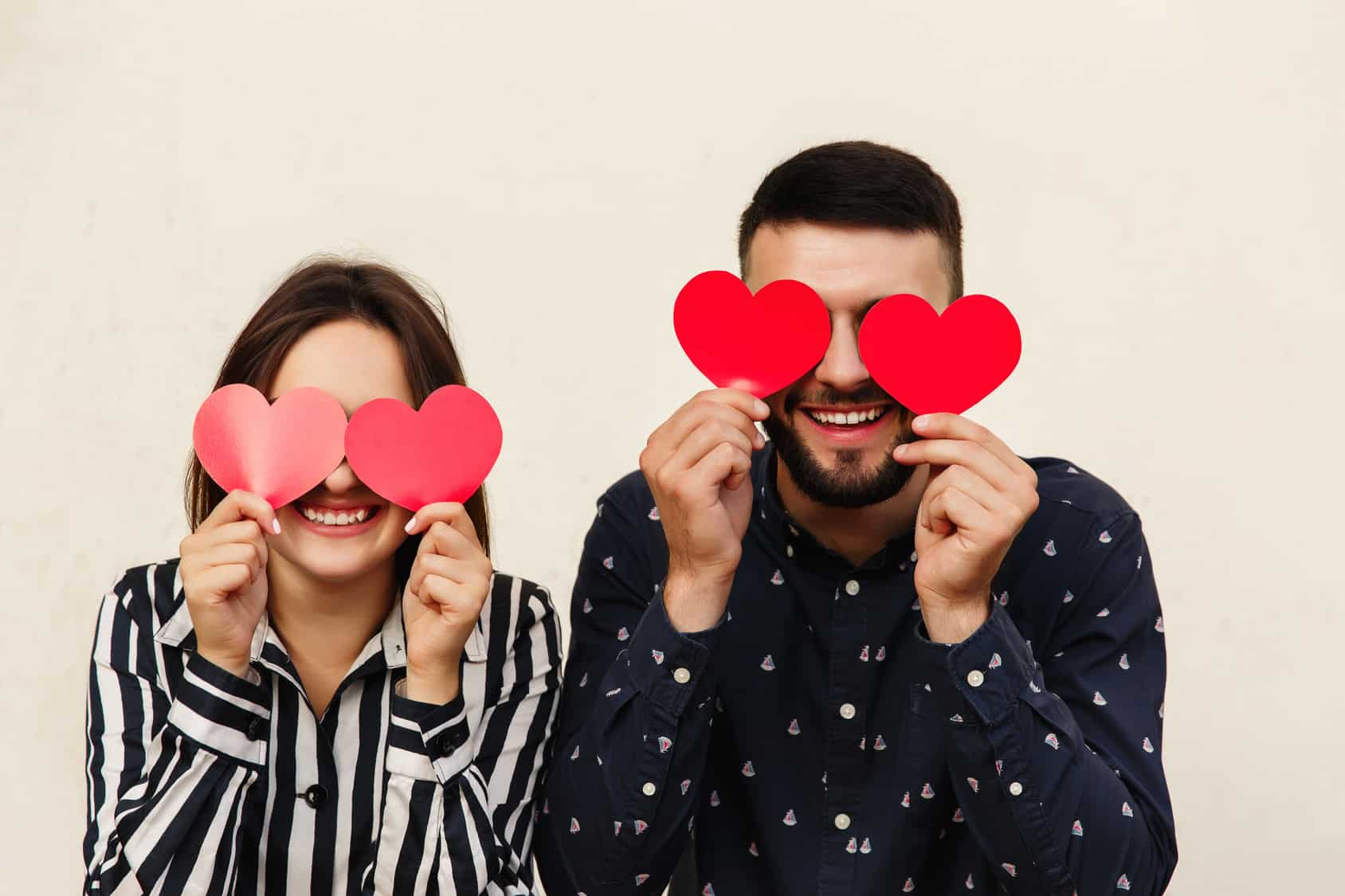 More will forgo the holiday, but those who embrace it will spend the same.

This Valentine’s Day will be the first during the pandemic, and the economic havoc from COVID-19 will take its toll on holiday spending – but not like you might expect.

Even before the pandemic, Valentine’s Day was viewed with increasing skepticism by average Americans. In 2019, Debt.com’s spending survey showed most of us weren’t as susceptible to overspending on Valentine’s Day as we typically are during the winter holidays.

In both 2019 and 2021, it was a statistical dead heat when it came to answering this question: “If your partner is having financial trouble and paying off debt, would you still expect them to spend money on Valentine’s Day?” Two years ago, about 88 percent said no. And this year? It’s…around 88 percent.

Even the amount we spend will largely be unchanged. The most common total was $50 or less. In 2019, 42.5 percent spent that. This year, 43 percent expect to. As for the other end of the spectrum, only a handful of average Americans ever spend more than $150 on Valentine’s Day – less than 1 percent in both 2019 and 2021.

Yet where the pandemic has had its greatest impact is in the number of Americans who will forgo the holiday all together. In 2019, 11.5 percent said they wouldn’t spend a dime. This year, it’s jumped to nearly 20 percent.

“We’ve seen how the pandemic convinced Americans to spend less during the holidays, and we’ve seen how the economic catastrophe has even changed how they think about money,” says Debt.com chairman Howard Dvorkin, CPA. “So it’s no surprise that Valentine’s Day spending will take a hit this year.” 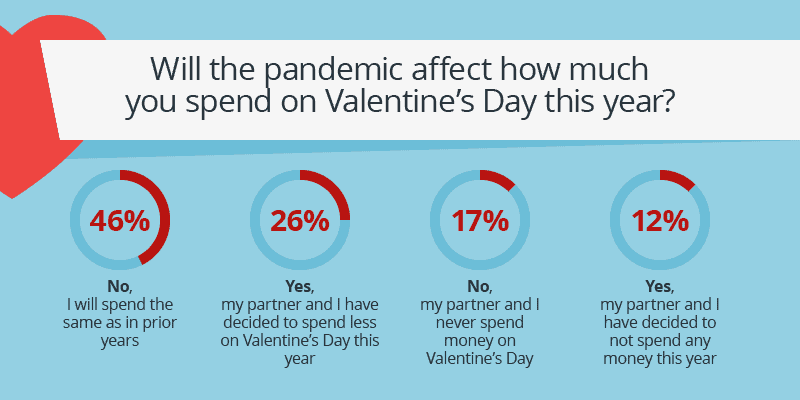 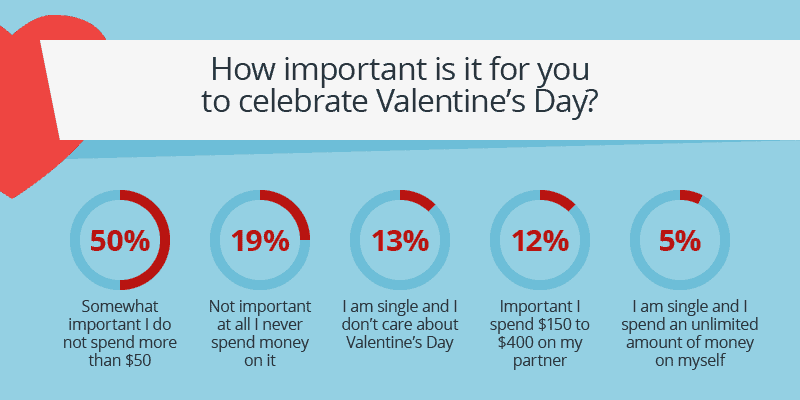 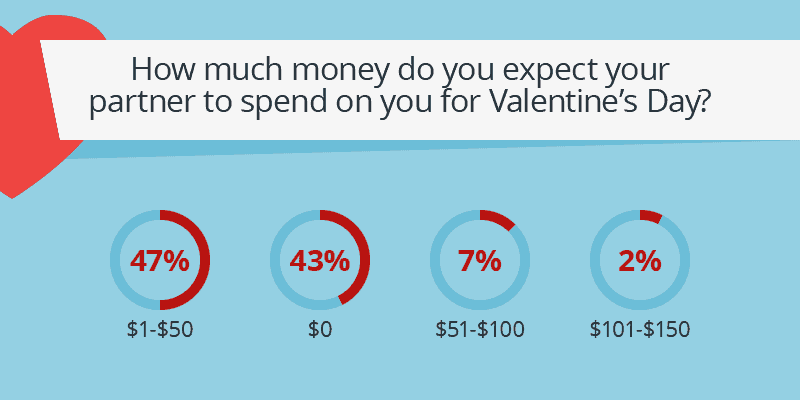 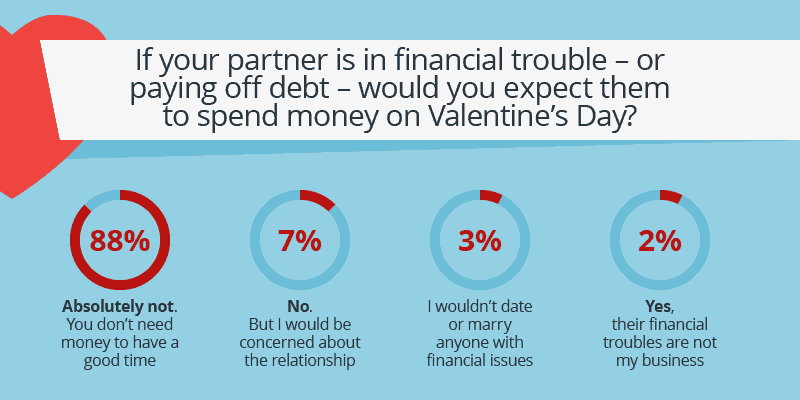 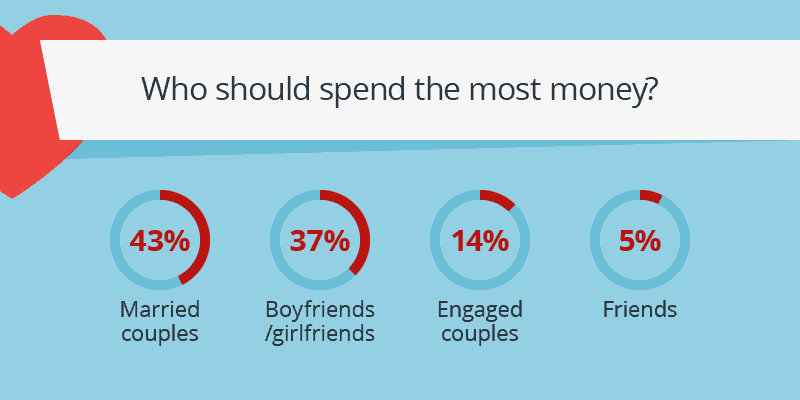 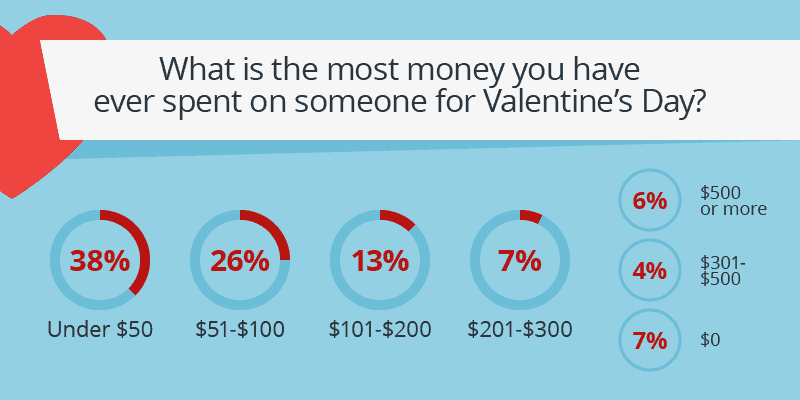 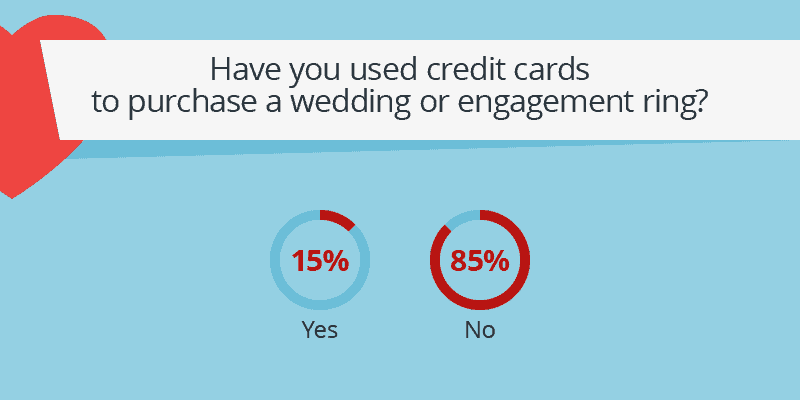 Methodology:  Debt.com surveyed 1,200 people and asked 11 questions about how they plan to spend this Valentine’s Day. People responded from all 50 states and Washington, DC and were aged 18 and above. Responses were collected through SurveyMonkey. The survey was conducted from Jan. 22, 2021 to Feb. 2, 2021.

Someone may ask you to be their Valentine on Feb. 14, but they probably won’t try to buy your love. That’s the conclusion from the second annual Debt.com Valentine’s Day Survey, which shows nearly half of American adults expect their loved ones to spend nothing on the holiday. Almost half expect to spend around $50.

That’s insignificant compared to the nearly $850 each adult spent during the winter holiday season (according to the National Retail Federation).

In fact, while many Americans go into debt during the winter holidays, Det.com respondents said they’d question their own relationships if their significant others did the same for Valentine’s Day. Other results…

Debt.com 2018 Survey: Your Valentine Isn’t Keen on Adding to Your Debt

Fort Lauderdale, Feb. 13, 2018 – Despite reports of near record-high spending for Valentine’s Day, a new Debt.com survey (results below) finds most people are not interested in their partner going into debt to get the perfect gift. In fact, almost half of survey respondents said they don’t expect their partner to spend anything at all this year.

Debt.com surveyed over 1,200 Americans over the age of 18 to ask how they intended to spend money this Valentine’s Day, as well as what they expected from their significant others. The majority of respondents (67 percent) said it was at least somewhat important to mark the occasion. That includes 7 percent who said they were single, but planned to spoil themselves.

“We tend to over-gift in the desire to make our loved ones happy,” explains Howard Dvorkin, Chairman of Debt.com. “We expect less and give more, because everyone wants to make sure their loved ones know how much they care. Overspending can easily be avoided at holidays like Valentine’s Day with a simple conversation. Talk about what you expect as a couple, so you can both be on the same page in avoiding debt.”

This advice fits with the fact that 89 percent of people say they wouldn’t expect an indebted partner to take on more debt to buy a gift. Most survey respondents said you don’t need money to have a good time on Valentine’s Day.

“Being up front about financial challenges and setting spending limits on gifts shows you’re financially responsible,” Dvorkin says. “That’s an attractive quality to have, so you may do more for your relationship if you’re honest than if you overextended yourself for a pricey gift.”

About: Debt.com is the consumer website where people can find help with credit card debt, student loan assistance, credit monitoring, tax debt, identity theft, credit repair, bankruptcy, debt collector harassment and more. Debt.com works with only vetted and certified providers that give the best advice and solutions for consumers ‘when life happens’.

Do you want to save money on a Valentine’s Day gift? See your options: