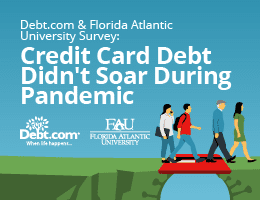 Those who suffered most were the youngest.

As the pandemic winds down, new research shows credit card debt didn’t reach record highs in the U.S. as finance experts originally predicted. But it turns out the most likely to survive COVID-19 were least immune to credit card debt.

By last July, more than 50 million Americans found themselves out of work due to government-ordered shutdowns. Today, a nationwide survey reveals most of them were in the early phase of their careers and had no choice but to take on credit card debt to make ends meet.

The survey of 1,000 Americans conducted by Florida Atlantic University’s Business and Economics Polling Initiative (FAU BEPI) – a polling institute that conducts surveys on business, economics, political and social issues to gauge attitudes and opinions at regional state and national levels – shows the majority of Americans made it through the pandemic without charging up large credit card bills. That’s with the exception of everyone under 39 years old. They got nailed.

Roughly 3 in 5 Millennials (ages 25-39) replied yes when asked, “Did the COVID-19 pandemic cause any income loss in your household?” That number shot up to 82 percent when members of Generation Z (ages 18-24) answered yes to that question. It seems the income loss led to credit card usage to survive.

Nearly 70 percent of Gen Z respondents said the pandemic, “caused them to take on more credit card debt than they otherwise would have.” That number dropped for Millennials, but not much: 46 percent answered yes when asked.

Nearly 6 in 10 of Gen Z respondents had to stop making payments on their credit cards. The same for 4 in 10 of Millennials who took the survey.

The data shows the finances of Gen Zers and Millennials were already fragile. More than 4 in 10 respondents ages 18 to 24 said, “they regularly carry a credit card balance month-to-month.”

“It’s devastating to hear the career path of our nation’s future began with a patch of thin ice. So many have already fallen into a dangerous place,” said Don Silvestri, president of Debt.com. “Millennials carry so much baggage leftover from the last economic downturn. It’s a shame to see the next generation now facing a similar dilemma. One can only hope as the economy recovers, our young workforce can find a lifeline and get back on stable ground.”

For more information on how younger workers took on more credit card debt during the pandemic, read the full Americans’ Views on Their Personal Finances Before and After COVID-19 Report and infographic focused on Millennials and Generation Z findings.

The pandemic caused most respondents to lose income 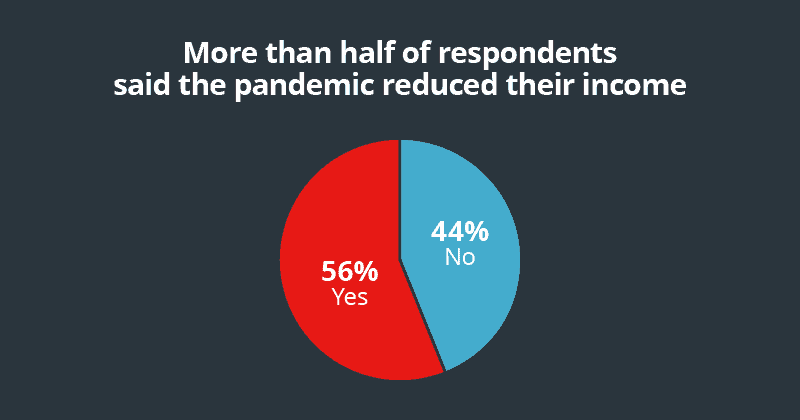 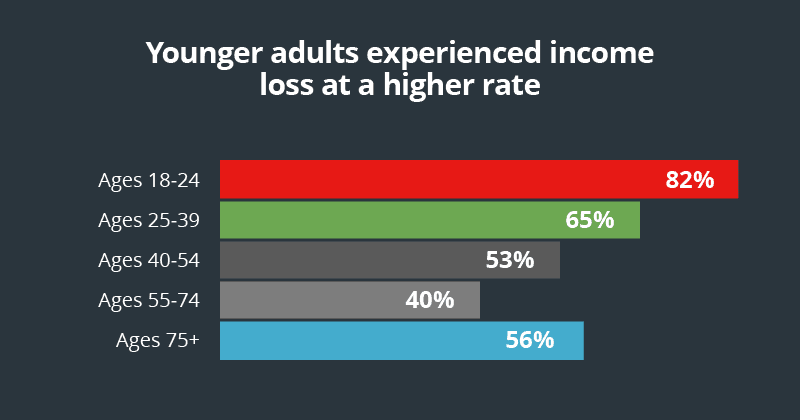 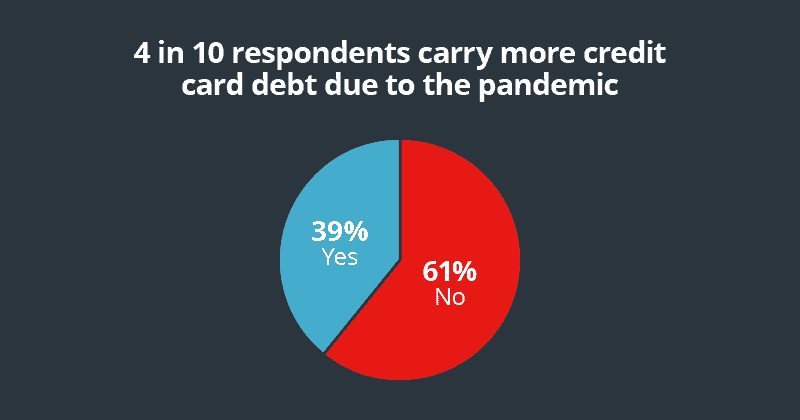 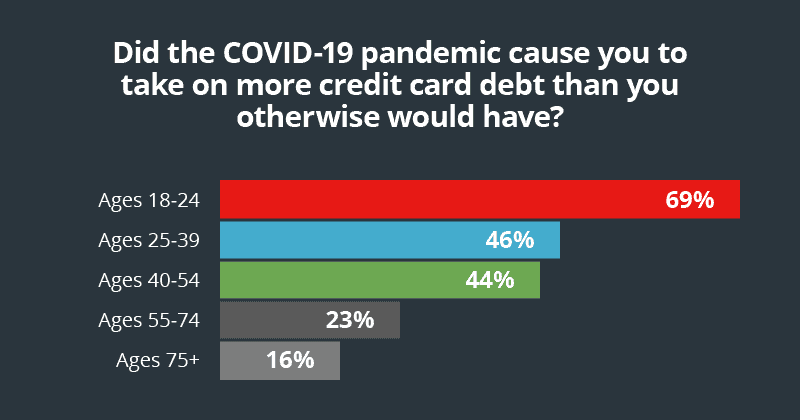 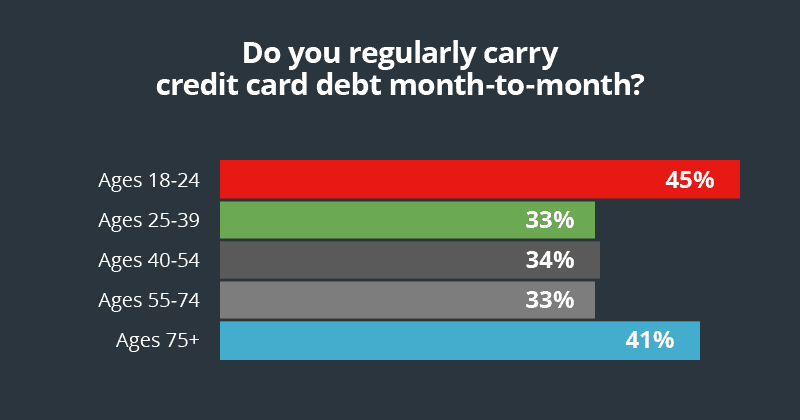 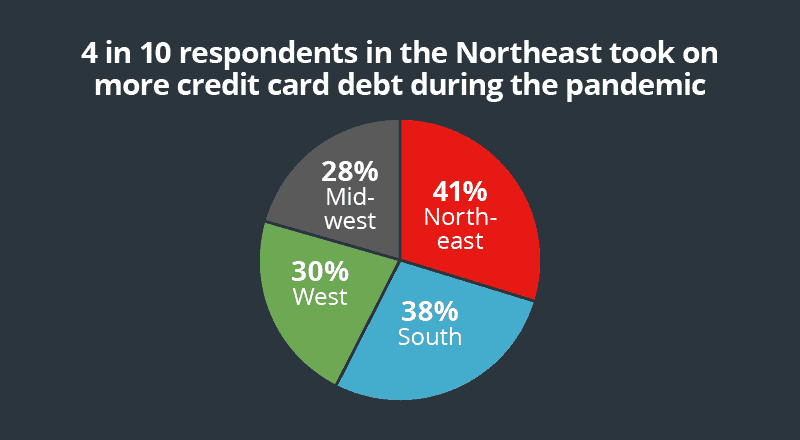 Most survey respondents said they carry up to $7,500 in credit card debt 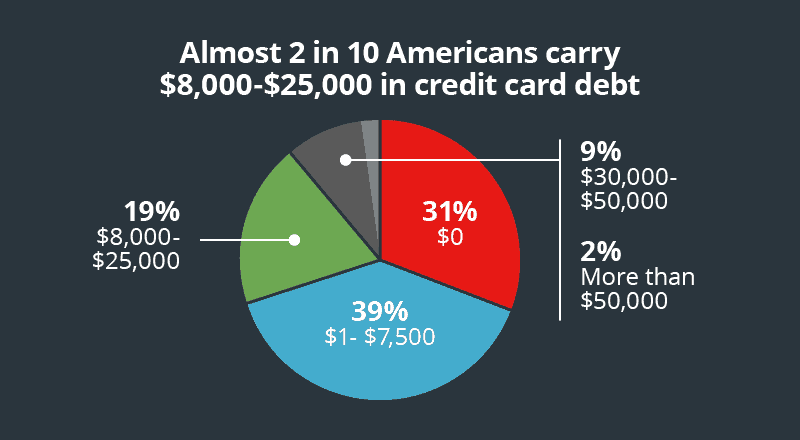 Methodology: Data was collected Oct. 1-20, 2021, from 1,022 Americans over the age of 18, using a mixed mode sample of online, cell phone and telephone participants. All respondents interviewed in this study were part of either a fully representative sample using mixed mode random stratified probabilistic sampling and a non-probability panel sample. The credibility interval for the sample is +/- 3.065% in 19 of 20 cases.