Debt.com » News » Are You and Your Spouse Talking About Money Enough?

If you don’t talk about finances, dark days may be ahead. But don’t worry – we have tips on how to avoid this.

If you don’t talk about finances, dark days may be ahead. But don’t worry – we have tips on how to avoid this.

When Elle from finance blog Couple Money and her husband got engaged, she thought managing money would be a “piece of cake.” [1] But nothing about finances is ever easy.

“Very quickly we discovered we had different ideas on money!” she says. “I came from a background where if you can afford the payments, you were good. My husband was much more conservative and cautious with money.”

They cobbled together a plan to manage their finances despite these differences, and even had enough extra money to develop an emergency fund. But while they’ve made peace with their finances through communication, most other couples haven’t.

Although being married gives you a leg up financially – two incomes are better than one, after all – 36 percent of married couples say that money is the biggest stressor in their marriage, according to a 2018 study from Ally Bank. [2] That’s more than twice the amount who said their health (17 percent) and family (13 percent) are the largest stressors.

The truth is that managing money as a couple comes with problems of its own, such as a lack of dialogue on money, financial infidelity, and even divorce. But the good news is that we have some tips on how to avoid all three.


Looking for a better, faster, easier way to budget? Debt.com has partnered with Tiller to bring you easy-to-use budgeting spreadsheets.

Miscommunication harms your financial future together

It all starts going downhill when you avoid talking about the elephant in the room – how is money going to work in your marriage?

Three-quarters of couples in the U.S. share a bank account but almost a third are nervous, confused, or afraid of saving money with their partner, says a 2017 study from financial service group John Hancock. [3] Fifty-seven percent even avoid bringing it up on a weekly or monthly basis.

And the less you have your finances together, the less you’re prepared for life’s random and financially disastrous nature.

We don’t like to think about losing a loved one, but the fact remains that couples aren’t ready to handle the costs of divorce or the death of a spouse. Financial services company TD Ameritrade says two-thirds of couples don’t have a plan in case either of those things happens, even though one of them is guaranteed – but most men and women believe they’re financially ready to handle either scenario anyways. [4]

“Advance planning could provide a much-needed boost in financial security for those who unexpectedly end up alone at any phase of their lives,” says David Lynch, managing director for TD Ameritrade. “Considering divorce or the loss of a spouse is a smart addition to any long-term financial plan. It’s no different than planning for things like a major illness, disability or potential long-term care needs.”

About 12 million Americans are hiding credit cards or savings accounts from their partner, according to a 2017 poll by CreditCards.com – and that’s just the tip of the iceberg. [5]

Financial infidelity covers many things, but it boils down to knowingly withholding important financial information from your partner. That can take a lot of different forms: 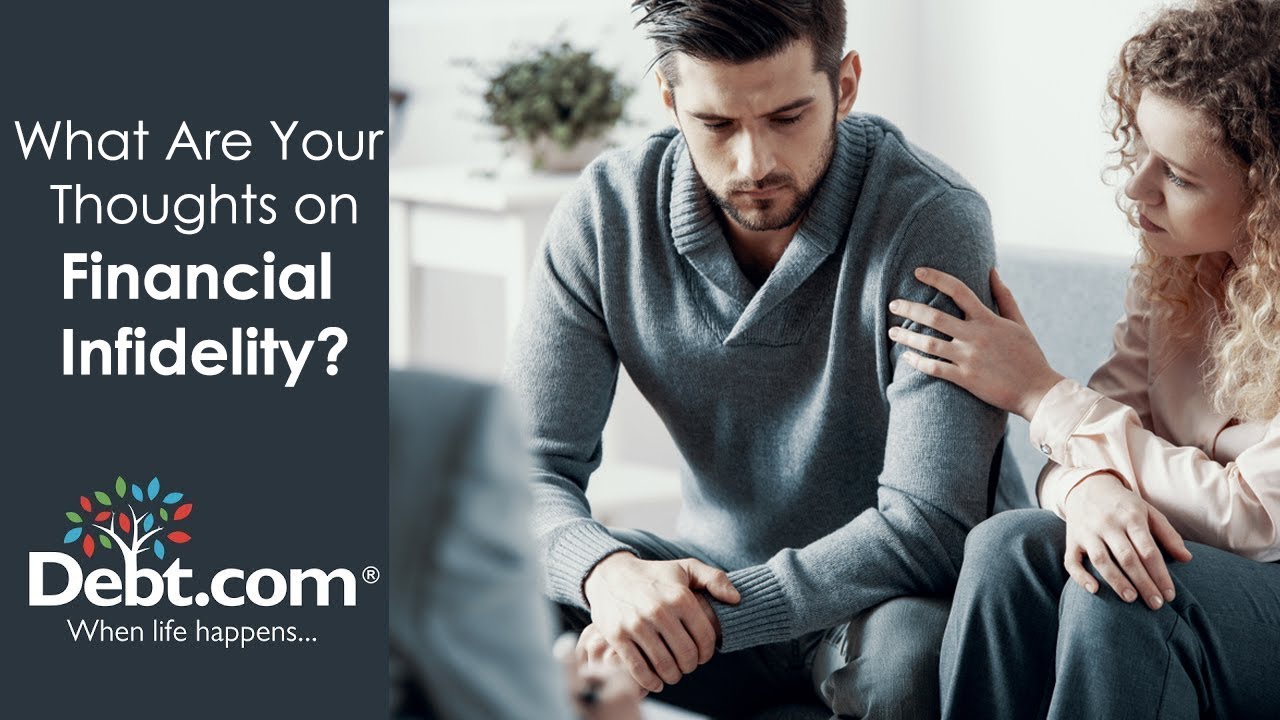 David Auten from debtfreeguys.com: The topic of money is not a sexy topic or an endearing topic. Especially when you hold on to or have some inhibitions or fears, or you’re actually hiding something.

Shani Curry, purseempowerment.com: What I see more than the infidelity is probably more financial divorce. So you’ll have people that are inside of a marriage that is operating very separately with their money. So you don’t even have the opportunity to cheat, because they have already got a feel for your habits, how you relate to money, and decided to have a financial separation.

Bethany Bayless, bethanybayless.org: So we do a lot of work with the military especially, and there are times when military members are on deployment and it’s a really difficult time for spouses back at home. And one of the biggest ways they can cope with that is with retail therapy.

Tracie Fobes, pennypinchinmom.com: It’s that stay-at-home-mom standpoint that she’s filling a void. She doesn’t have that social interaction. She’s looking for and she’s trying to fill something that’s missing on a personal level with stuff.

Financial infidelity creates a divide in your relationship. No matter what form it takes, it breeds mistrust between you and your partner, which is probably going to turn into a pretty ugly fight when they find out.

“Any time you get into these kinds of things where you are operating behind the scenes, it usually comes out at some point,” says Dallas-based marriage and family therapist Corey Allan. “We can’t keep things hidden, especially in today’s technological world. Any spouse who has any kind of suspicion can become a detective and find it.”

Partners usually hide money for different reasons, although men are more likely to commit financial infidelity, according to Katie Smith, the finance manager at a “divorce solicitor” in Leeds, England.

This is because men make more money than women and are “more interested in having side things to waste money on,” as Smith put it. On the other hand, women are more likely to hide money because they plan on leaving their partner in the near future. It can be difficult to begin saving for a separation or divorce for women who rely on their husbands financially.

Either way, neither party likes it when financial matters aren’t transparent. If you suspect your partner is hiding money from you, there are a few ways to spot financial infidelity.

If you can’t get into bank accounts or look at statements, tax returns, or other financial documents, you may want to check with your spouse first to see if the blame falls to the banking institution or them.

Has a random credit card bill appeared? Did you get a notice for something you don’t recall buying and you know your partner didn’t mention? It could be a sign.

Is your budget a mess? Go over every line item and compare it to your accounts. Something could be missing.

Money problems can cause divorce

A 2017 survey from Experian shows that nearly 60 percent of divorcees admit that money played some role in their breakup – and that’s not all they found. [6]

Rod Griffin, director of public education for Experian, says most of these couples didn’t even talk about money to begin with.

“A lot of people don’t want to dive into money issues and stare at them openly because they think it will create conflict. But the lack of open, positive conversation is what creates conflict,” he said.

And that conflict can be big. Two-thirds of survey respondents said their ex’s spending habits were different than expected before getting married. It’s higher among women: 71 percent vs. 60 percent of men.

“Were they talking about money in terms of achieving their financial goals together or were they arguments?” he asks. “If the talk was about something that already happened, it doesn’t help the financial situation. If the talk is how to work together to hit common financial goals in the marriage, that’s a completely different thing. That’s a positive thing.”

How to manage your finances in marriage

Only one-third of Americans (34 percent) think finances should be discussed by the time the relationship gets serious, according to a 2017 study by Chase, [7] but Debt.com founder and CPA Howard Dvorkin believes that earlier is always better when it comes to having the money talk.

“You need to know that your partner’s goals are aligned with your own or it will eventually create friction in your relationship,” Dvorkin explains. “If one person is a saver and the other is a spender, it doesn’t mean the relationship is doomed. However, you need to be open and honest so you can figure out how to move forward together as a couple.”

Thankfully, communication with your spouse is at least partially in your control. Here are a few tips on how to blend your finances effectively:

Who is the person who’s going to pay the bills and control spending? This isn’t necessarily the person who earns the most money. It should be the one who spends it. For example, if your wife pays the bills, it’s wise to appoint her as the treasurer.

This doesn’t mean that you have no say in your finances. On the contrary, a couple should make decisions together. But for regular expenses, someone needs to manage the bank account.

Going into credit card debt is one of the biggest problems for couples. And it nearly always happens because of miscommunication. If you want to stay debt free, you should assign a spending limit. Any expenditure that goes above should require authorization from both parties.

This spending limit can be as high or as low as you please. But make sure you’re both happy with it. You don’t want it to be too high or you could be like many Americans with tons of credit card debt.

Some people don’t like to talk about money, even if they’re firmly in the black. You need to get past this nervousness and review your finances like a mature adult. Every month or so you should sit down with your spouse to discuss your current financial situation, including your bills, income, and future plans.

For example, if you’re looking to get rid of debt, you should discuss whether you’re on-target to getting debt free. You may also discuss how to cut spending and increase income. It might be difficult to talk about money, but it’s a necessary discussion to have on a regular basis.

[1] https://couplemoney.com/
[2] https://media.ally.com/2018-06-12-Money-Causes-the-Most-Stress-for-Couples-According-to-New-Ally-Survey
[3] https://www.johnhancock.com/about-us/news/digital-advice/2018/01/-relationshipgoals–new-study-by-john-hancock-finds-33-percent-of-couples-anxious-about-saving-money-together-with-84-percent-looking-to-technology-for-help.html
[4] https://www.amtd.com/news-and-stories/press-releases/press-release-details/2017/Americans-Financially-Unprepared-for-Divorce-Widowhood/default.aspx
[5] https://www.creditcards.com/credit-card-news/financial-infidelity-poll-hidden-account/
[6] https://www.experian.com/blogs/ask-experian/survey-results-when-divorce-does-damage-to-your-credit/?pc=prt_exp_0&cc=prt_0217_divorcesurvey
[7] https://media.chase.com/news/americans-swipe-left-when-it-comes-to-high-credit-card-debt
Did we provide the information you needed? If not let us know and we’ll improve this page.
Let us know if you liked the post. That’s the only way we can improve.
Yes
No Watch Out for These 6 Emotional Triggers for Overspending