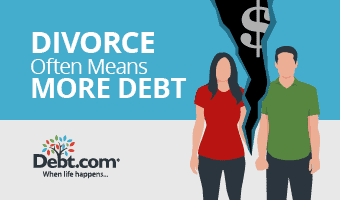 Nearly a third of respondents said credit card debt contributed to their divorce.

Debt.com surveyed more than 500 divorcees about how their relationships impacted their finances. We found that credit card debt and financial disagreements were major factors in getting divorced.

One-third said that credit card debt was a deciding factor, while roughly 4 in 10 pointed to disagreements on major purchases.

“No divorce is simple, and there’s rarely a single cause,” says Debt.com president Don Silvestri. “Yet it’s quite apparent from these results that a sour economy has also soured some marriages. While it’s impossible to attribute divorce specifically to inflation and other economic factors, it’s clear they’re being cited more often as primary causes.”

Trouble came after the divorce too.

Forty-one percent of respondents told Debt.com that they took on more than $5,000 after their divorce. Twelve percent gained between $15,000 and $20,000 in debt.

Because divorce is expensive, many respondents considered avoiding it altogether.

Here are some of the biggest takeaways from the survey:

6 in 10 said they incurred debt after their divorce. 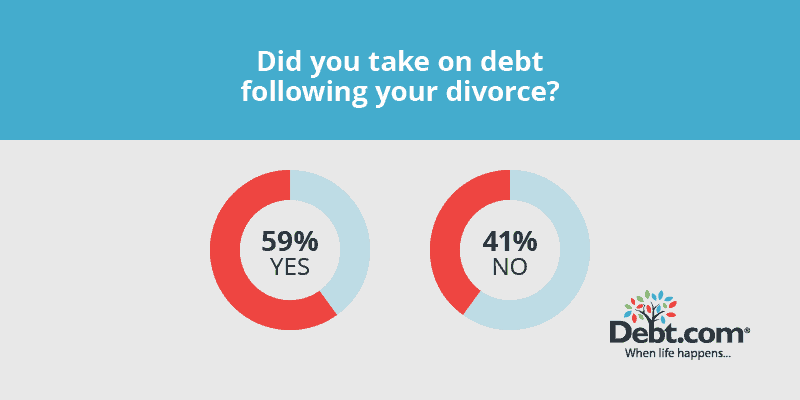 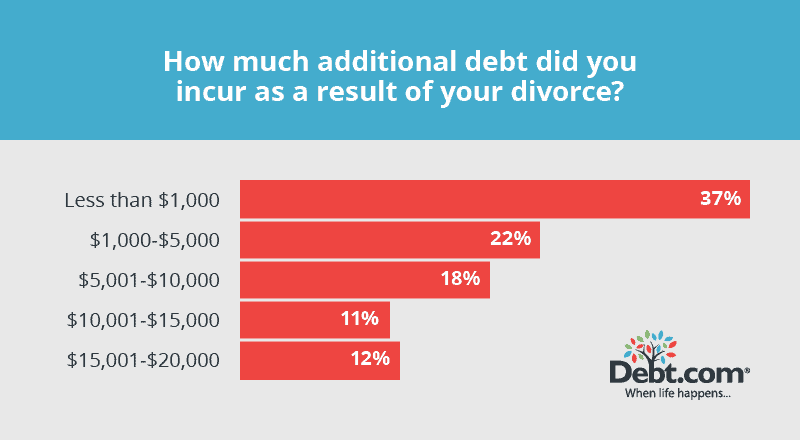 More than a third of divorcees said they or their spouse hid their debt. 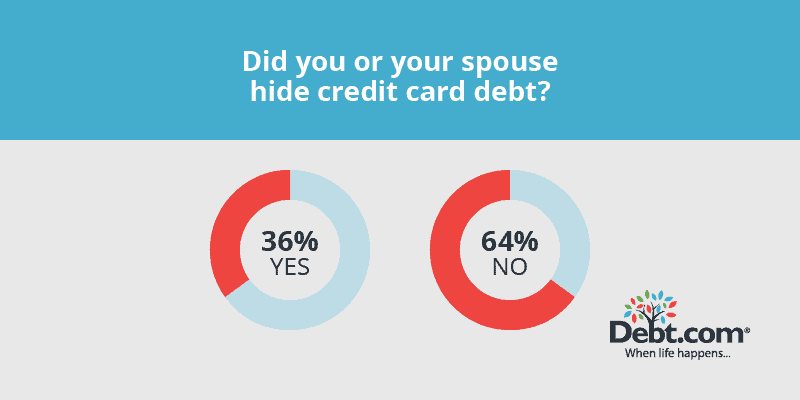 “Disagreements on big purchases” were a major factor in divorce. 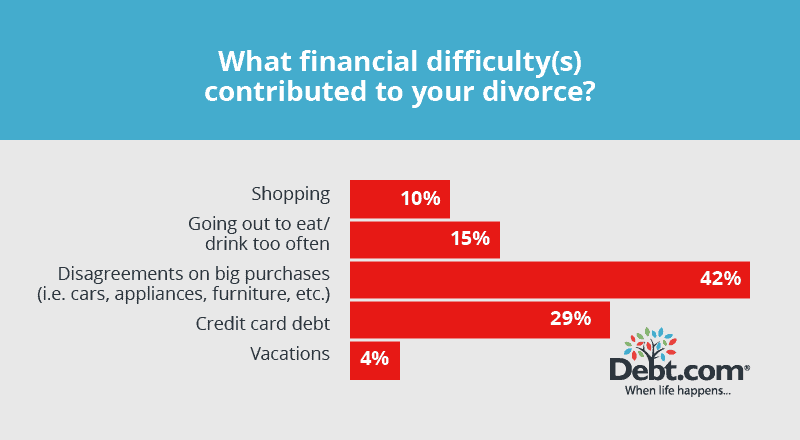 More than 4 in 10 said they took on a debt they previously shared with their partner. 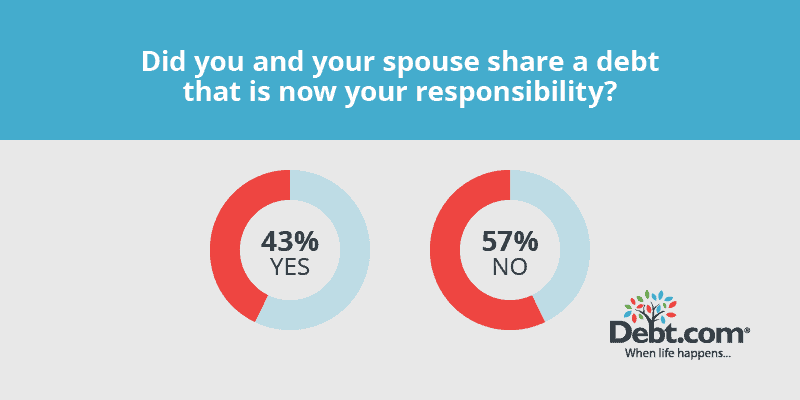 For many survey respondents, their debts reached more than $5,000 – and their credit scores dropped by more than 50 points.

Debt.com and DivorceMag.com partnered to ask Americans how divorce impacts their finances. After surveying more than 500 divorcees, we’ve determined that debt and financial disagreements can certainly lead to unhappiness in marriage – but it’s not why most break their vows.

One-third of divorced couples say financial problems were not a contributing factor to their split. However, nearly two-thirds reported they took on debt after their divorce was finalized.

Taking on more debt meant taking a hit to their credit score. More than 4 in 10 said their divorce sunk their credit by at least 50 points.

Most respondents said financial difficulties did not contribute to their divorce 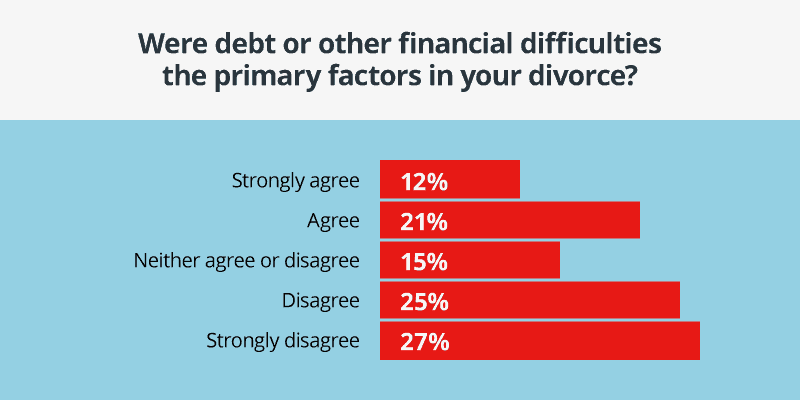 2 in 3 said they took on debt following their divorce 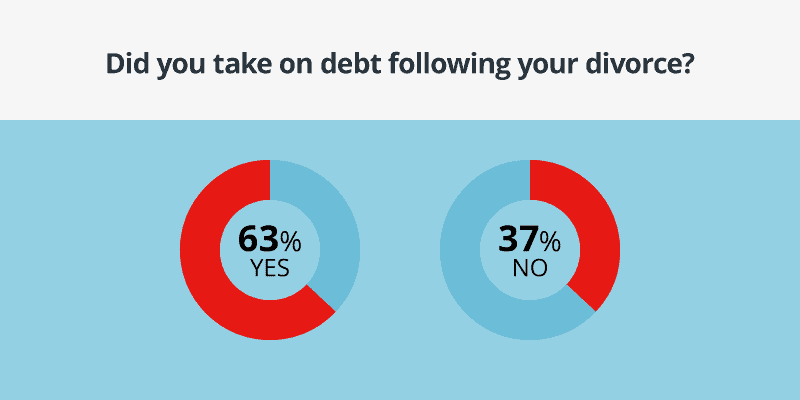 Divorce caused more than half of respondents to take on over $5,000 worth of debt 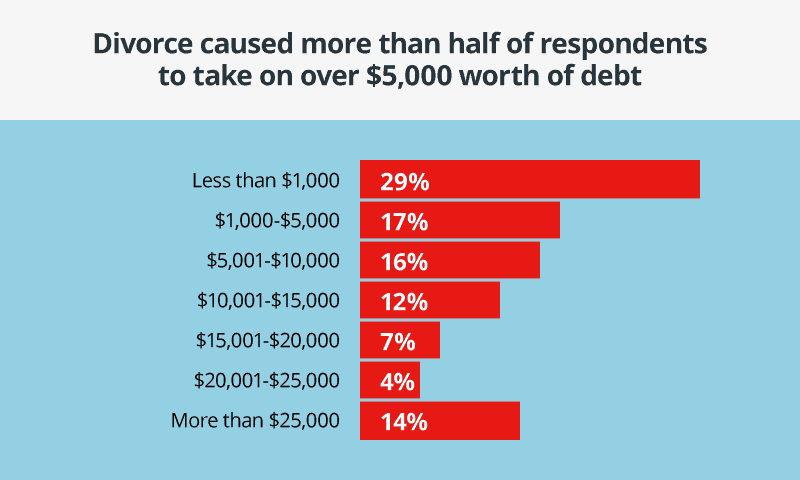 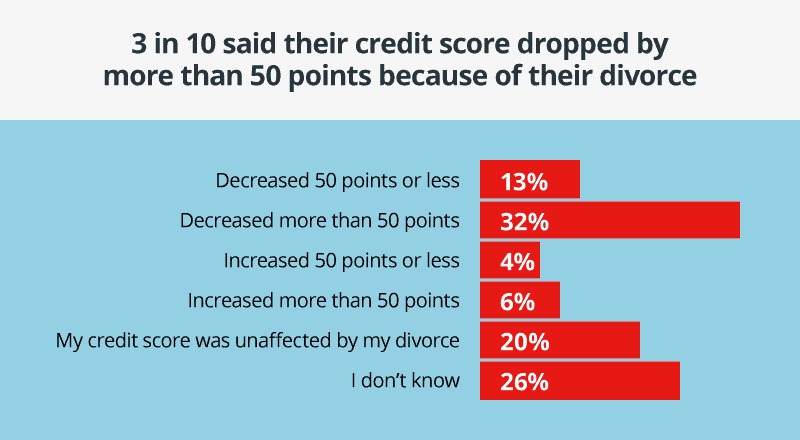 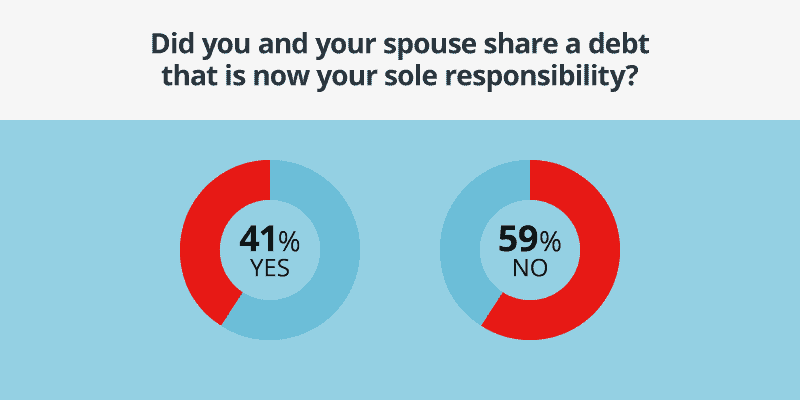 Methodology: Debt.com and DivorceMag.com surveyed more than 500 divorced Americans and asked nine questions related to how divorce impacted their finances. People responded from all 50 states and Washington, DC and were aged 18 and above. Responses were collected through SurveyMonkey. The survey was conducted from Jan. 28, 2022 to March 30, 2022. Percentages were rounded up to the nearest whole number and might not total 100 percent.

Most survey respondents told us that debt and financial difficulties were not a factor in their divorce.

All respondents to our survey told us they took on debt following their divorce – and the majority (40%) said it was more than $5,000.

When asked if they took on sole responsibility for a shared debt following divorce, respondents were near-split. Most respondents (57%) didn’t – but close to half (43%) did.

Most respondents (38%) said their credit score dropped more than 50 points.

Most divorced respondents told us they “never considered separation” rather than filing for divorce.

Methodology: Debt.com and Moneywise.com surveyed 2,700 Americans through online platform SurveyMonkey between Nov. 1, 2019 and Dec. 29, 2019 – but only sourced data from about 800 Americans who have been through a divorce. Moneywise.com is a personal finance website affiliated with Wise Publishing headquartered in Toronto Canada.

Methodology: Debt.com surveyed 526 adults and asked 11 questions about their divorce. People responded from all 50 states and Washington, DC, and were aged 18 and above. Responses were collected through SurveyMonkey. The survey was conducted on January 31, 2023.