Compare your finances to financial statistics for the average American household to see how you stack up..

Keeping up with the Joneses usually leads you down a bad financial path, so why look at personal finance statistics like the ones below?

These types of statistics give you a baseline to compare to as you assess your own financial health. You can assess if a financial challenge is unique to you or if it’s endemic due to a weak economy. Are you falling behind because of debt or are you ahead of the curve with a well-balanced household budget?

Use the financial statistics below to see where you stand. Just keep in mind that financial success is almost always relative. What one household counts as success may be just getting by for another. See how you stack up and use that information to plan your next financial moves.

Each year the Bureau of Labor Statistics releases an overview of average household money management stats. The most recent report covers spending habits for 2020. 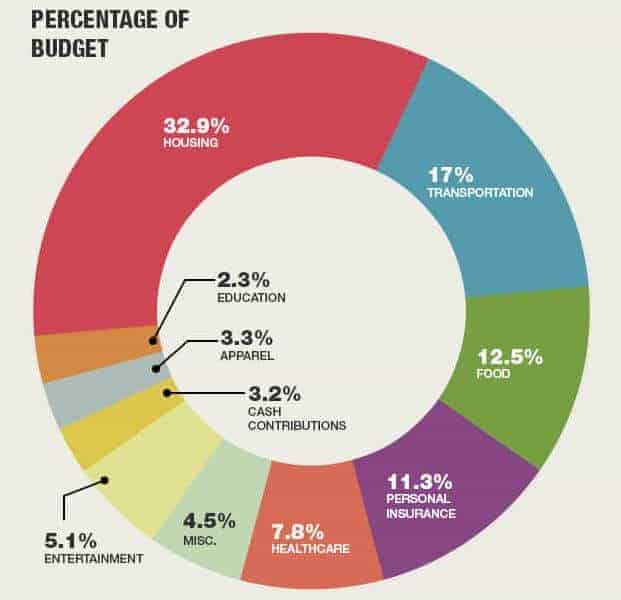 Here’s how some of the budget categories that you see break down:

Americans spend more money this time of year than any other – and 2021 won’t be an exception. Ninety percent of consumers plan to celebrate the winter holidays this year, according to research from the National Retail Federation.

The average amount they’ll spend? A whopping $998 on “holiday essentials”, such as decorations, food, gifts, and shipping costs. Here’s a breakdown of where that money will go to:

With that large a figure pegged on holiday spending, it’s safe to say most Americans will go into debt for the holidays. A 2020 study from MagnifyMoney reported, on average, $1,381 was borrowed to fund the holidays – 89% said they wouldn’t be able to pay off that debt within a month. Here’s a breakdown of the types of debt incurred and how many consumers took on these debts:

How many Americans actually keep a formal budget?

The average American spends less than 4.5 hours a year with scheduled time on their calendar for finances, according to Calendar.com.

A MarketWatch report found that more than half of American households (56%) were living paycheck to paycheck in Q1 of 2021.

However, a separate 2021 survey by LendingClub and PYMNTS found just over 60 percent of the paycheck-to-paycheck population is able to pay their bills comfortably, while close to 40 percent struggle to keep up.

Need a little help getting your budget in order? Tiller spreadsheets make budgeting fast and hassle-free!

Get StartedCall To Action Link
Sponsored 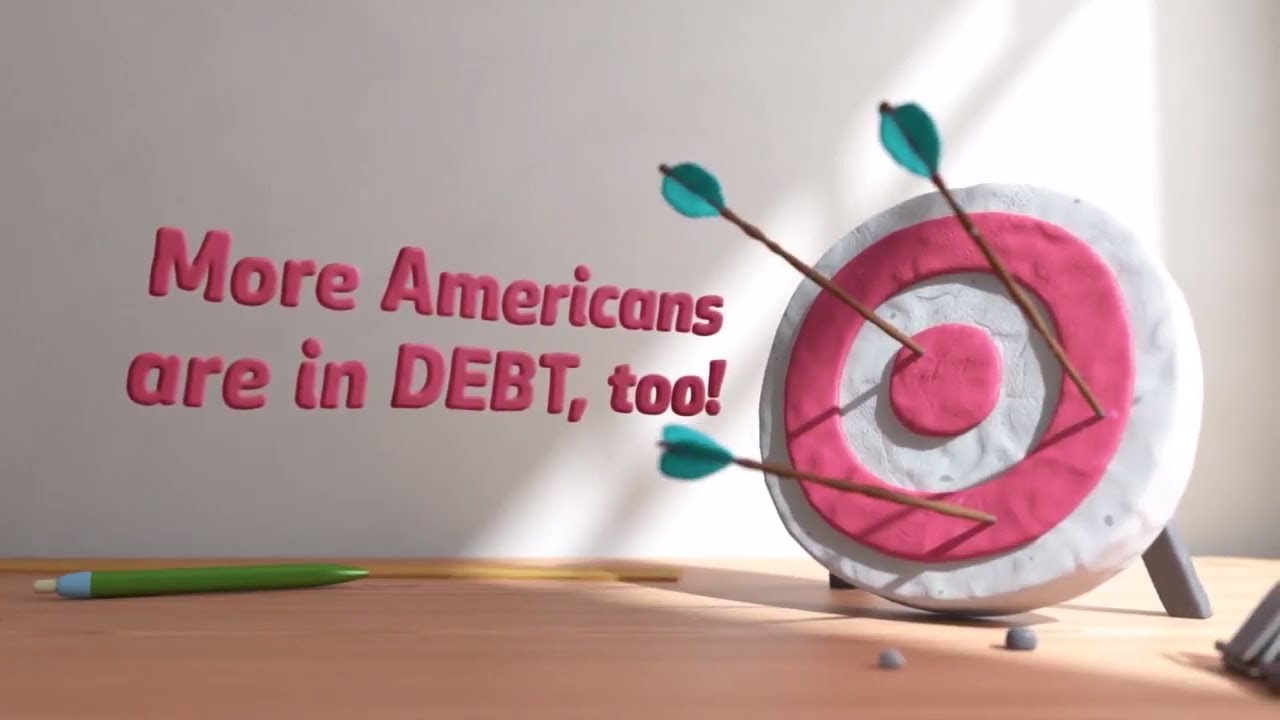 Narrator: Total American debt is higher than ever

Narrator: Credit card debt stands at 7 hundred and 64 billion dollars while student loan debt is over ONE trillion dollars

[On-screen text] More Americans are in debt, too

Narrator: Average American household debt levels are high across the board with close to $50,000 in student loans and over $16,000 in credit card debt

Narrator: It’s no wonder almost half of Americans feel stressed about their finances

Due to the nature of the pandemic, credit card debt, student loan debt, and auto debt have fluctuated within the last few years.

According to the latest 2021 data from the Federal Reserve:

According to a Y charts investment company:

According to NerdWallet’s latest 2021 data this is the average American debt:

NerdWallet attributes the increase in American indebtedness to the fact that cost of living consistently outpaces income growth. While median household income levels have gone down 3% in the past few years, cost of living increased by 7%.

Percentage of Americans in debt

Defaults and delinquencies on the rise

Several reports released in 2021 show how borrowers have fallen behind on their payments: 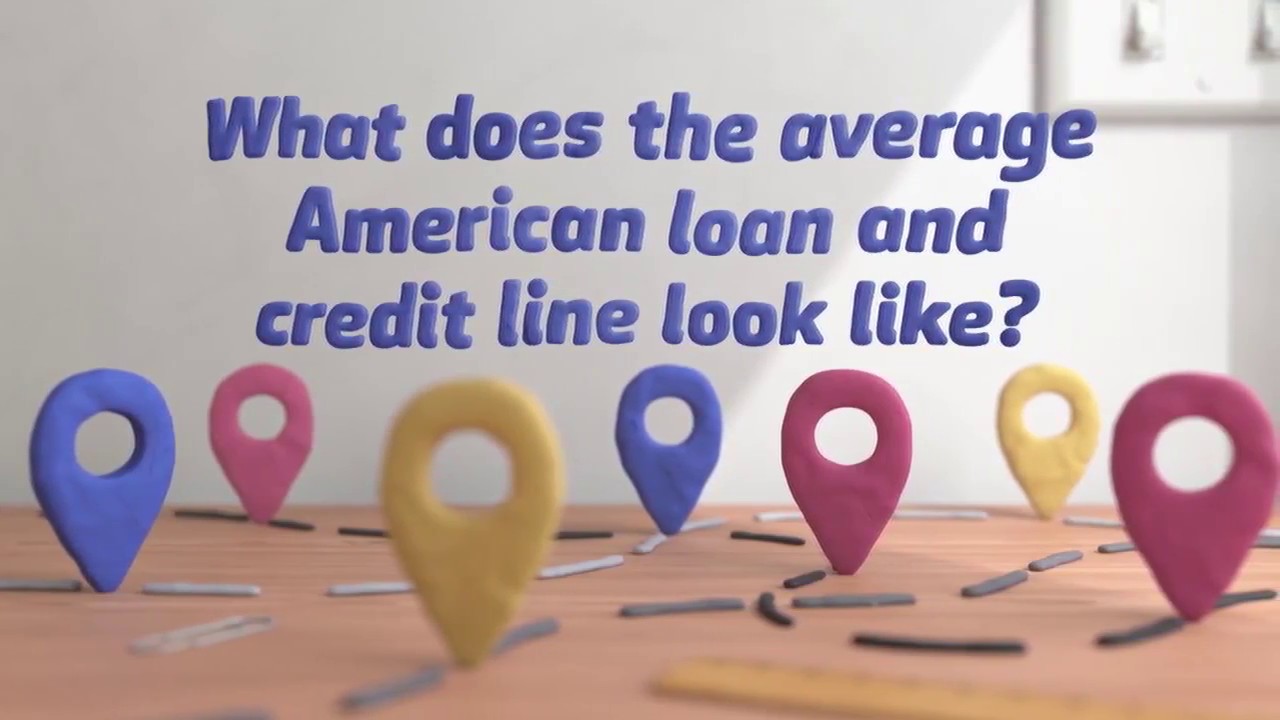 Video Transcript
[On-screen text] What does the average American loan and credit line look like?

Narrator: Just because the average household has over $136,000 in debt, it doesn’t mean we’re slowing down in seeking new financing

Narrator: In student loans, the average graduate now leaves school with over $37,000 in loans to repay

Narrator: For a borrower age 20-30 years old, your average monthly payment is about $350

Narrator: If you plan on getting new student loans, here are the current interest rates for federal loans

Narrator: For new credit cards, interest rates are higher now than they were in 2016. But a bad credit score means an even higher APR.

Narrator: Yet the average monthly payment is up to almost $500

Narrator: The average amount financed for a new car versus a used car varies by more than $10,000

Narrator: With an average interest rate of 4.1% on a 30-year mortgage, the average monthly payment was almost $1,500

According to a WalletHub auto financing report:

Nearly 19 million borrowers owe between $10,000 and $40,000 in federal student loans according to Nerdwallet.

Education Data reported 1 out of 10 Americans has defaulted on a student loan, and 7.8% of all student loan debt is in default ($124.4 billion); An average of 15% of student loans are in default at any given time.

According to a 2021 article published by The Motley Fool:

If you’re facing challenges with debt, visit Debt.com’s Solutions Center today so you can get out of debt fast, minimize interest charges and save your credit! 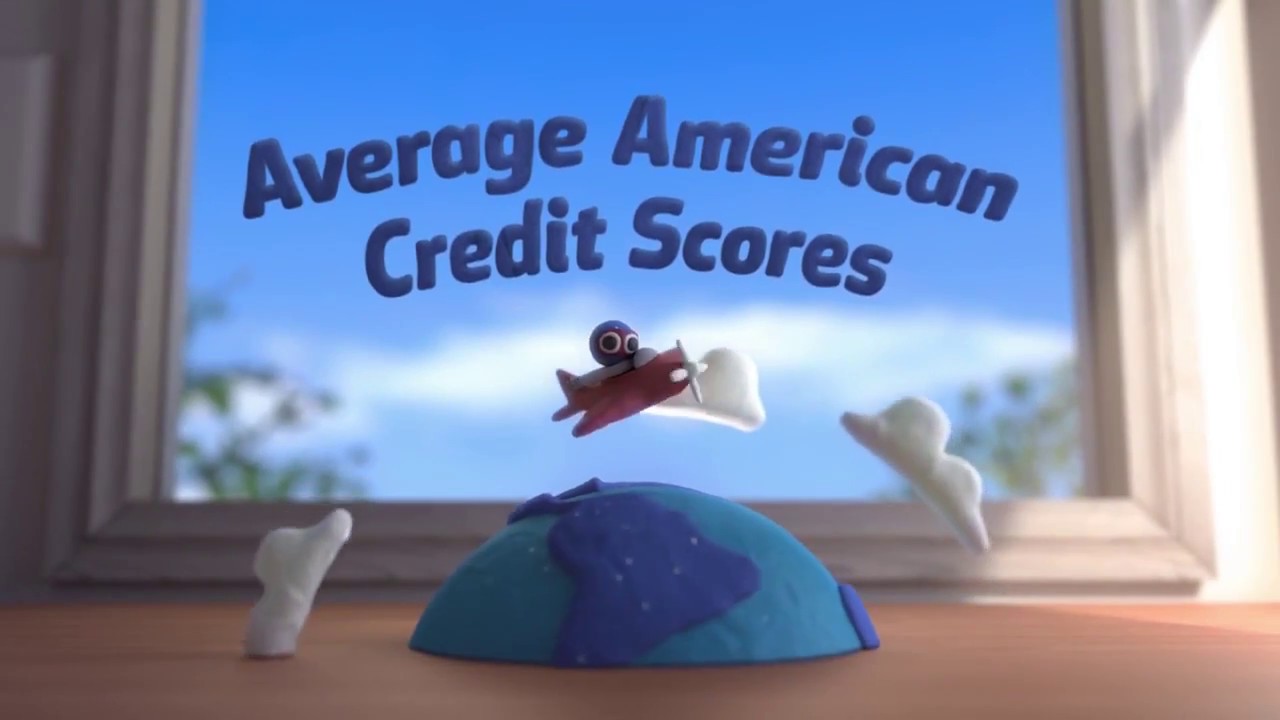 Narrator: Good credit is a big part of your ability to be financially successful. So, how do average Americans score today?

Narrator: Although credit scores usually improve with age, people 30 to 39 years old have the highest number of subprime credit scores

[On-screen text] For FHA home loans 689 is the average FICO score vs. a 755 score for a traditional mortgage

Narrator: Homebuyer credit scores vary from 689 for FHA loans to 755 for traditional loans

[On-screen text] People who buy used cars have an average score of 643 vs. new car buyers at 714

[On-screen text] 591 is the average score of bankruptcy filers

Narrator: If you declare bankruptcy, you may fall into a subprime credit score category

According to a report on ValuePenguin:

Want to improve your credit score? Debt.com’s Solutions Center has a variety of tools to help you achieve and maintain good credit. 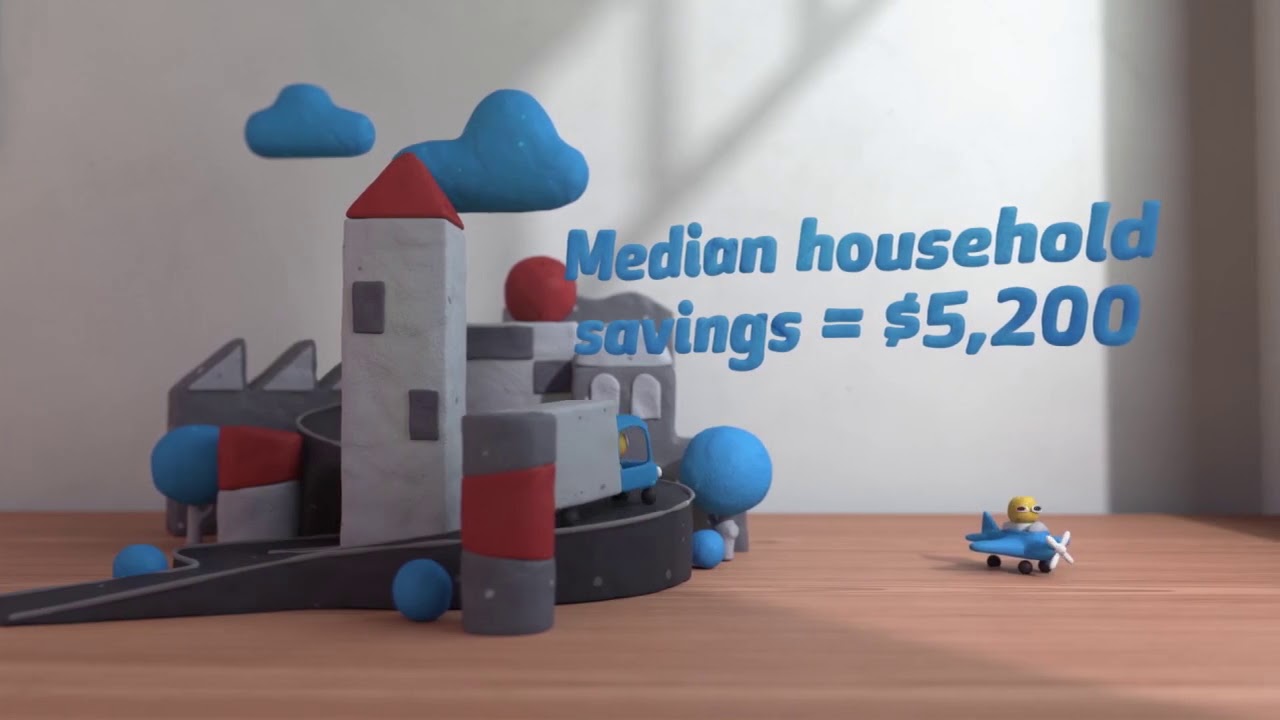 Narrator: Financial stability is gained by having savings, but most Americans are falling behind

Narrator: According to the federal reserve the average household savings is about $33,000, but the median saving for all working-age families is just $5,200

Narrator: Retirement savings are on shaky ground; almost 1 in 4 Americans having less than $10,000 saved

Narrator: In fact, 33% of Americans have $0 saved for retirement

Narrator: For more information on how to eliminate debt and save effectively, visit Debt.com or call 844-402-3574

A 2019 GOBankingRates report finds 45.5 percent of Americans have $0 saved for retirement.

Debt.com Knows Debt, and How to Help You Get Out of It

Finding the Best Way to Get Out of Debt

How to Pay Off Credit Card Debt

How to Pay Off Student Loan Debt Fast

How Do I Get Out of Tax Debt?

Solve Your Problems with Debt Collection

Debt Relief Programs for Every Type of Debt

Debt Consolidation for Every Type of Debt 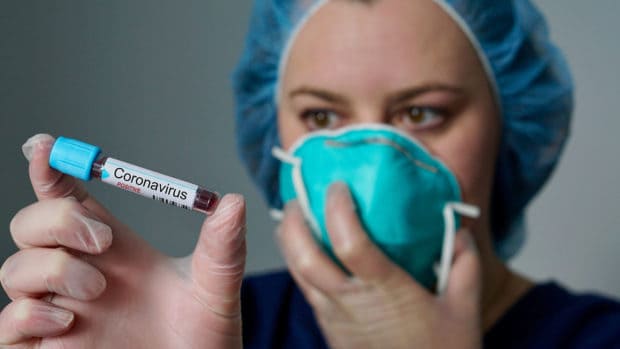 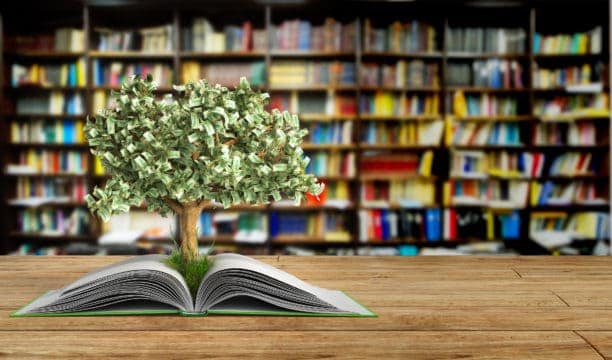 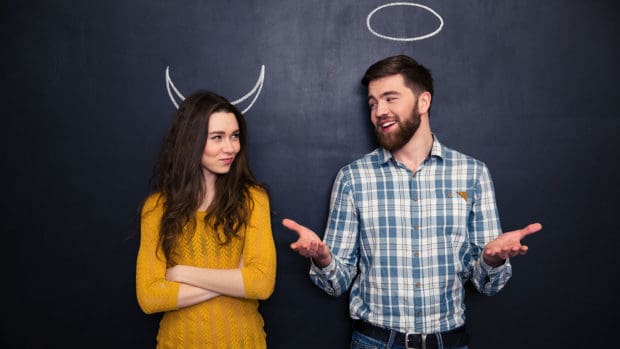 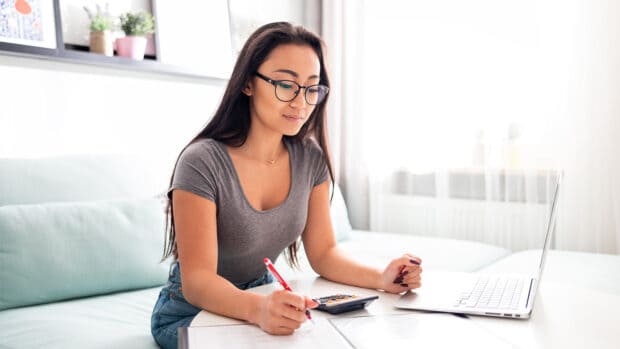