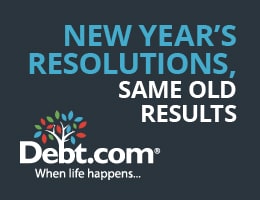 Debt.com has asked the same questions every year for the past three years – and the majority of survey respondents say the same thing each time.

“Save more money” has been Americans’ favorite financial resolution every year with the exception of 2018 – when the most selected response was to “pay off my credit card debt.”

It’s not surprising that Americans wanted to pay down their credit card debt most in 2018. That year, Debt.com had the most replies to “running up/maxing out my credit card balances” as the biggest financial regret from the prior year.

Each year, the majority of survey respondents tell us they didn’t have a New Year’s resolution related to debt, money or credit in the past.

And most respondents probably don’t make financial resolutions, because most don’t think they work.

And it looks like financial New Year’s resolutions don’t work for most Americans. Consistently for three years straight, the majority of our survey respondents have told us that they didn’t reach their goals.

For those who do achieve their financial resolutions, it takes most survey respondents a full year to get it done.

Conversely, it took those who stopped working on their financial New Year’s resolutions a full year before throwing in the towel. So they definitely gave it a try before saying making a resolution just doesn’t work for them.

Methodology: Debt.com surveyed 1,326 people and asked ten questions related to personal finance and the New Year to understand consumer behavior around their money resolutions. People responded from all 50 states and Washington, DC and were aged 18 and above. Responses were collected through SurveyMonkey. The survey was conducted from Dec. 27, 2019 to Jan. 12, 2020. *In 2019 Debt.com surveyed 2,100 people using the same type of consumer-focused questions regarding personal finance New Year resolutions utilizing SurveyMoney. And in 2018 Debt.com surveyed 1,349 people with the same survey tool.